Hello Games has released an update to its No Man's Sky action-adventure survival game that has taken things in a surprising direction. Some may raise an eyebrow that the key feature update delivered in v2.24 is the 'ByteBeat Device'. The No Man's Sky development blog helps make sense of the update by discussing the various requests Hello Games has had, and the context of the ByteBeat Device in the game structure.

According to Hello Games, many players spend a large proportion of their time in No Man's Sky indulging in base building. Though there are a wealth of base construction options some felt an extra dimension was missing - sounds and music. Hello Games says its coders are passionate about music and enjoy playing around in apps like FruityLoops, so it took on the ambition to shoehorn a full audio creation tool for the community into the game.

With this v2.24 update gamers can install and power up the ByteBeast Device in their bases and produce sound in a number of ways. The in-game app allows for quick start audio soundscapes using its signature method of procedurally generating random presets. These can allow for a good start to developing your own musical compositions - and can be much friendlier to start with than a blank stave. 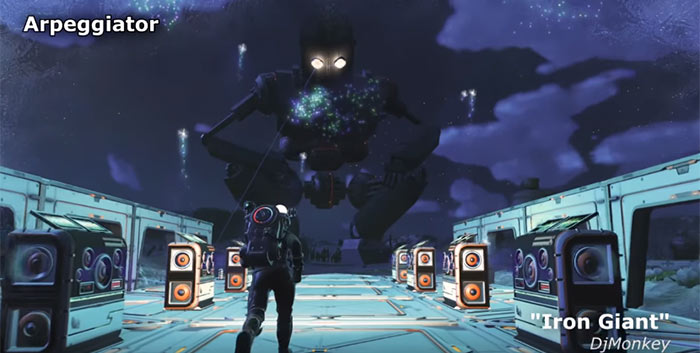 To be clear this random music can be tinkered with in many ways by those who care to do so. For example there are options to explore the sonics deeper - by editing notes (pitch, duration, arpeggios and sequences), rhythms, and even editing the raw sound data of your instruments. Users of all-in-one music making programs will be very familiar with the concepts of sequencer, rhythm composer, and audio editor. ByteBeat machines can be cabled together for more complex soundscapes and compositions.

As you can see in the main video, the audio you create comes to life in the game as a virtual sound system. Interestingly, with a nod to all the aRGB PCs around nowadays, a new ByteBeat Switch allows players to power other devices, such as lights, with bursts of power that sync up to the rhythm of your track.

Alongside ByteBeat, the No Man's Sky developers have implemented a host of tweaks and bug fixes. You can check these out via the blog which contains patch notes towards the bottom of the page.

3dcandy
Making music with a free game thrown in…

Were can I get it for free exactly?
Posted by mtyson - Wed 18 Dec 2019 19:38
NMS game is currently on sale at GOG for £19.99
They just emailed me about it.
Posted by EvilCycle - Wed 18 Dec 2019 21:07
That actually looks pretty interesting! From the images it seems like a very basic DAW. In English: a simplified version of what you would see being used on a full setup, for making actual music with, IE it looks like very simple digital audio workstation software.
Posted by Scryder - Wed 18 Dec 2019 23:09
I'm thinking of checking out the game again. I “completed” the story and gave up on the game after 110 hours, a couple of years ago. At least they're still supporting it… and I am curious what the game looks like now.