Windows 95 has been made into an 'app' which you can now tinker with on your Windows PC, MacOS, or Linux machine. Yesterday Slack developer Felix Rieseberg released the software onto GitHub, weighing in at 129MB, and today followed it up with version 1.1 - including floppy disk support. 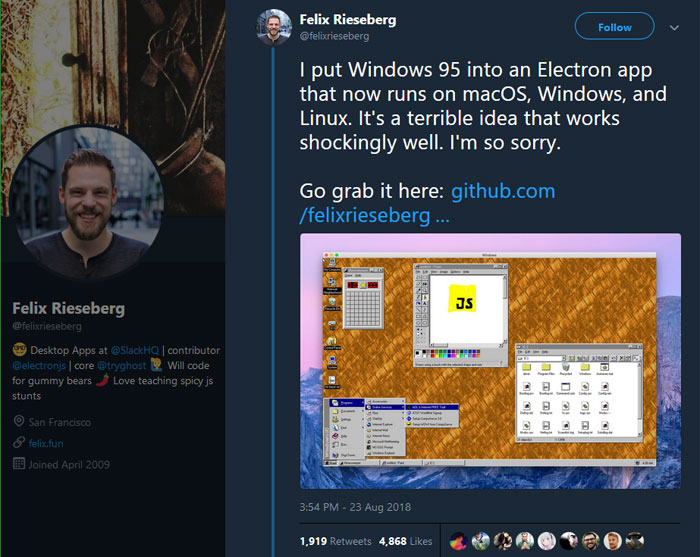 Rieseberg announced the Windows 95 app release via Twitter. He wrote "I put Windows 95 into an Electron app that now runs on macOS, Windows, and Linux," and joked "It's a terrible idea that works shockingly well. I'm so sorry."

After downloading and running the Electron app on my PC, everything seemed to run OK during a rudimentary poke around. You will find all the Windows 95 standards here, and ye olde Minesweeper seems popular with Twitterers. I'm not sure of the boundaries of this app, but some reports, like one on The Verge, say that Internet Explorer doesn't work. Actually Rieseberg followed up his release Tweet to explain that networking and node are disabled, likely for security reasons.

Today's update, delivering Floppy disk support, might mean you can add some old Windows 95 programs into this somehow, or at least read and save files from the old base set of programs. During my very short testing the only wrinkle that I noticed was that, even when minimised, the app consumes approx 18 to 20 per cent CPU resources, according to the Windows 10 resource monitor. 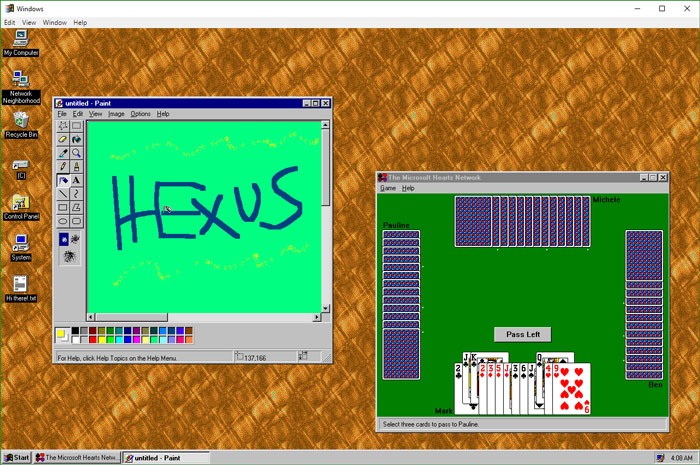 I never bought into PCs until Windows 95 arrived - when I invested in a sturdy Dan machine (P133MMX I think). Before that I had various Motorola CPU machines from Atari, Apple and Commodore and was put off by DOS and early versions of Windows which were on university, then work, machines. So, for me, Windows 95 holds a special place in my computer retro-nostalgia memories. I will be watching this app's development with interest.

I remember cheering after the 4 hour marathon attempting to install this… delightful piece of software that I refuse to call an OS. It was a GUI running on DOS. You could quit and return to DOS. Generally, I'd say an operating system is not something you can just quit.
Posted by spacein_vader - Fri 24 Aug 2018 13:32

philehidiot
Bugs which means it uses 18-20% CPU whilst doing nothing? Sounds like Windows 95 working perfectly.

I remember cheering after the 4 hour marathon attempting to install this… delightful piece of software that I refuse to call an OS. It was a GUI running on DOS. You could quit and return to DOS. Generally, I'd say an operating system is not something you can just quit.

By that reckoning the first consumer OS Microsoft released after DOS 6.22 was XP in 2001.
Posted by cheesemp - Fri 24 Aug 2018 13:49
I'm sorted of surprised to see this get so much noise. I jumped into the source code and it just wraps the v86 javascript (an x86 VM) library into an electron app. You can visit the v86 website and run Windows 98, DOS and other OSs straight in a web browser. The v86 guys should be getting the glory…
Posted by [GSV]Trig - Fri 24 Aug 2018 14:01
Ooof Windows 95, I wonder if the Buddy Holly video is still in there that came on the CD version…